Henry Frayne needs no introduction. He jumps. Long and Triple. Sure he may have been M.I.A for a few years with injury but that doesn’t mean he could or should ever be ruled out. Perhaps one his strongest assets is his mental resilience. His loyalty to his coach Gary Bourne and his relaxed yet intense nature.

Henry Frayne loves what he does. Like many he has an uncanny resilience when it comes to never losing sight of what his potential is. He believes in his team, his coach and the his own processes. 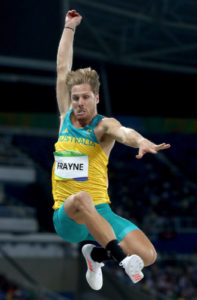 It has not been without many many setbacks. Henry’s fight to Rio has been one of frustration, constant doubt and questions raised from those who should be helping him and supporting him. Even the Athletics Australia head coach said that Henry had been “out in the wilderness” and unexpected to return to world class long jumping.

I had the pleasure of occasionally working along side of Henry for the last few years. We  have shared many conversations about life, training, mental fortitude over who knows how many coffees and it has been an absolute pleasure.

Most recently Henry posted an insight into his climb back to Rio. The original post can be read here:

From a performance perspective I entered the games with little external expectations upon me. After four long years of injury I was said to have been, in the words of the Australian Athletics head coach “out in the wilderness” & unexpected to return to world class long jumping. This sort of comment was perhaps ill informed and representative of a lack of true vision, however it suited me all the same as it meant I was free to fly under the radar as RIO approached. This allowed me & my coach to work on establishing a base of training that injuries had robbed me of for so many years, and thus we set about focusing on training done, rather then competitions and performances achieved. This meant that in the lead up to RIO I gained 16 weeks of straight uninjured training which my body had been longing for. However on the flip side it meant that I did not have any competitions to fine tune the intricacies of long jump – mainly run up steering and transition off the takeoff board.

[Tweet “”words of the Australian Athletics head coach “out in the wilderness” & unexpected to return to world class long jumping.” @henryfrayne”]

When I arrived in Florida in late July for the Australian team camp I would probably say that in my heart I was targeting a medal but in my head I was aimed at improving upon my London performance of ninth. However things changed in Florida. It became abundantly clear whilst tapering and completing final sessions in Florida that the 16 weeks of home preparation had left me in far better shape then in could have ever expected. For those who know the long jumping world, in Florida I pushed my ten stride PB to 7.86m …. A very solid jump in anyone’s book. So at this point the internal expectation of myself and my coach shifted towards the pointy end of the positions on offer in RIO. Leaving Florida for RIO there was an un spoken expectation of a medal.

[Tweet “”focusing on training done, rather then competitions and performances achieved.” @henryfrayne”]

Well then logically perhaps you can guess following this sort pre games form, that 7th place whilst respectable … Certainly didn’t leave me satisfied. Again for those who knows the sport, you will understand that adding a mere 20cm from a ten stride approach to a full run up is a horrible conversion at the best of times. In my particular case it is far from the form I had when I set my PB of 8.27m in 2012 I was jumping between 7.15m – 7.30m off ten strides.

There is no hard and fast answer to why I didn’t convert training form to competition form, but my answer to people is that I was ‘competition rusty’ and still unconditioned for back to back days of jumping.

Sport is about learning and growing, RIO left me again disappointed after a major championships however it also gave me hope. I know I can convert these big pre RIO short approach jumps to full competition jumps, it’s just a matter of time! So when you ask me next time if RIO was amazing & I response with a seemingly negative “no not really” hopefully now you will have some context. 🙂

The second half of the question that often follows my performance is the general RIO experience… Was it epic?

And whilst I hate the negative vibes, I feel it is my duty to preach the truth. RIO was an average Olympics. Crowds were low, Atmosphere was mild around the village, fixtures were dated, or unfinished, transport took crazy times (Copacabana to the village 2hours in an uber for 20km one day!!! 1hr 20m on average), organisation and pre competition professionalism of processes was poor & crime was a big issue. This is just naming a few things that come to mind.

I think RIO is a beautiful city and I intend to travel through it properly one day, but in my humble opinion it was ill prepared to host an Olympics. Perhaps it was just unlucky to come up against such an amazing Olympics such as London was, but I think it failed to meet even humble expectations.

On a positive note the most publicised issue of Zika was a bit of a non issue … So bravo for getting on top of that Brazil.

To conclude my thoughts, I would like everyone to know that it was all an experience I wouldn’t change for anything. The beauty of sport is that you have to seize the day & even more so in the case of the Olympics. That is why it is the greatest sporting event on earth. However hopefully now when you ask an Olympian, or at least me, about how amazing it must have been, and you see in my poor effort to hide my true feelings a sense of negativity, you will understand why I or they feel that way, rather then just assuming we are mopey sad people ?.

As athletes at the highest level we expect a lot of our selves & of the Olympic experience … After all no revenue from the games goes back to the athletes so why should there be an excuse for mediocracy? 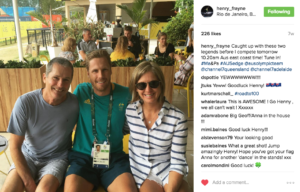 THINK: Many will want you, but few will invest.
Scroll to top