The topic of life after elite sport is currently on the lips and in the eyes of the general public in Australia and the better part the world for good reasons. For once people are able to see the side of sport that nobody really brings to life. The darker side of the beast as it were.

We have athletes struggling with substance abuse issues, suicide, and depression. The disconnect from the hormone filled, endorphin stimulating drive and constant struggle to be better and to achieve goals. Competition in its finest form is a chance to reveal that work to an audience. To triumph, to challenge, to win and to lose in the eyes of those who care to follow and know us as elite sportspeople.

Of all the hours, the gruelling numbers of repetitions, the injuries, the setbacks, the constant travelling, the training camps, the competition circuits, the drug testing, the time away from loved ones, the sacrifices and the rewards, most people only get to see the culmination of all those factors for a very very short period of time. In fact the German’s have published documents revealing that during an elite athlete cycle the amount of time one can be in peak shape is 30-36 weeks in a whole career!

As I personally reflect on my journey as an athlete I often ask myself the question,

It is certainly not worth the money, so why is it that so many dive into a lifestyle that turns us over so quickly? I do not have the amount of space to sit and write about all the reasons why it has been worth it for me, however I can say this.

Because I love it.

I love sport. I love athletics, and I love specifically throwing the discus. My mother Beth found a primary school book of stories where I wrote, “I will be in the Olympics when I grow up, because it will be fun”

I have always tried to bring more attention to the throws events through the use of many outlandish competition suits. I would hope that my contributions to the sport of athletics can be seen in a positive light. One of passion, honesty and honour. 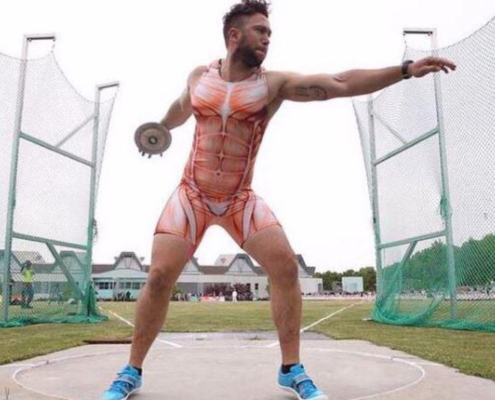 The question however of, “Who Am I?” has not always been easy for me to answer.

After 2009 and living in Germany alone in a 12m2 boarding house dorm room, it is fair to say that I had some dark moments. I was in an uncomfortable environment where I didn’t speak the language, I had no close friends, family thousands of kilometres away, no internet, no regular skype chats or FaceTime. It was eat sleep train day in day out. I wondered often to myself, “Is this even fun?” and “Why am I here?”

That whole year I had put aside everything to move forward. I was thinking long term. First I was going to win Commonwealths in 2010, then fight for a medal in 2011 and again in 2012. I had luckily graduated from University but I thought that if I wanted to take on the world then I had to be in a situation to do so. It was a huge sacrifice to see if I could move forward, and I knew that I was going to have to take a few steps backwards and change a lot of technical errors and training philosophies. This was my vision, my conviction and my own choice to do so! 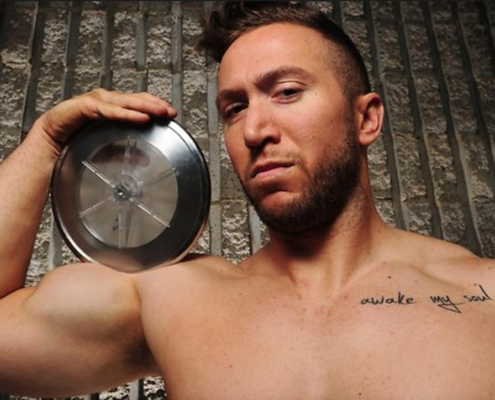 I was not expecting to make it to World Championships in Berlin, if I did it was going to be a huge bonus because I was committed to the long term puzzle. Fortunately I did make it, and my coach Jurgen Schult at the time (World Record Holder in Discus and Head Coach of Throwing in Germany) said to me.

“Don’t put too much pressure on yourself at this competition. Next year payback starts”

So I went out to qualifying round, threw ok but nothing great and directly after the competition the head coach of our NSO went out of his way to come and tell me…

After that comment I discovered that I was not enjoying sport, or life for that matter. All of my efforts had been immediately belittled by a person who didn’t even know why I moved to Germany. All he was interested in was whether or not his job was stable. However, as usual my family reminded me that no matter what happens they will always support me. If fail or if I succeed.

Jurgen (coach) was correct. The following year I started to see payback! My technique started to solidify, I broke the Australian Record and Area Record and finished 2nd at the World Cup then went on to win Commonwealth Gold in Delhi.

I still love this sport of Discus Throwing. That is the only reason I do it. As I have stated many times publicly, without my parents support I would never have made it. I have never ever felt like my National Sporting Organisation have really been behind me. Sure they supported me with some money along the way but it was not even 1/8th of the amount my parents did.

Maybe that is just the point? Maybe it is more than a dollar sign. Maybe it is mobilising athletes to feel valuable beyond dollars and beyond performance. To be respected for their efforts and the things that they do to succeed. For the risks that they take to chance winning. To be humanised and to track their lives and plans during and after sport.

Even with “athlete career education” personnel we still have these huge issues.

[Tweet “Or are we all just playing the victim? Feeling depressed for nothing?”]

From all of our Olympic athletes who do not make it to the medal table, are we all failures? Are we able to feel proud that we reached the level? Is making a personal best enough? Or are we all poor returns on investment? Or are we all just playing the victim? Feeling depressed for nothing? Struggling with substance abuse issues, suicide, and depression because we are weak or spoilt brats like Collin M on twitter proclaimed?

After Rio Olympics, the head coach of our National Sporting Organisation, Athletics Australia stated that I among other athletes are “perennial offenders” when it comes to our contribution to National Team Representation.

This comment really hurt me personally. That my efforts and contributions to Athletics in Australia are summarised to the media and the public by a representative of our national sporting organisation and communicating that I shall be known as a “serial failure”. A poor return on investment.

I was devastated enough with my performance alone and I cannot stop what the media write about me however, for the leader of your national sporting organisation to make that statement openly?

The demon of doubt is ever-present in athletes. It does not make it any better that we are constantly doubted by our leaders. That we have to prove ourselves to them. That the athletes and the coaches can not be trusted.

Often athletes who are outspoken on particular issues have had to deal with those issues without resolve for an incredibly long time before they can even open up about them. To vocalise the issue to those responsible and to be ignored is hard, and going public with thoughts is even harder. Whilst reading an issue about the mistreatment of some athletes recently I noted a fantastic quote:

How true that statement is. Maybe it is a combination of events that lead to issues for athletes post career. Or even issues that have been unresolved because we have been told to “shut up” and “get over it” so they are buried deep inside while we move forward and try our best to stay positive and fight on because it’s going to make us tougher “one day”

That “one day” may come. But the issues still remain. Unforgotten.

I have since taken a full time role as a leader of Athletics in Sweden. A job which I truly love and am constantly challenged by. A job that supports my wishes to continue to be active in athletics and transition into life after sport.

To create an environment for myself, similar to that of the German system that I was a part of for 6 years. Where athletes are supported finically to “train out” for the sake of physical and mental well being post career. Assisting their country’s elite to transition smoothly into life after sport.

I personally have come to the realisation that if I walk away from the sport that I love on a negative note that I would be doing a discredit to myself. That I let someone or something get the better of me. That I could not finish the story with, “and it was fun” just as I had wished when I was 7 years old.

[Tweet “That “one day” may come. But the issues still remain. Unforgotten.”]

I cannot predict how I will feel when I finally say, “Thank you athletics, It has been awesome” but I can tell you that it will be on my terms. Something that I truly hope will help me feel comfortable moving on “safely” and avoiding the struggles that many many athletes go through.

I honestly hope that in the environment and culture of sport where athletes shall not reveal weakness, where they shall be strong in all battles, that more athletes raise their voice and realise that it is also considered a “strength” to be able to talk about the issues that hinder us.

Mikala RobertsMentor Coach/Facilitator
FEATURE: “Why I still care about athletics”